In my previous post I have explained the Theory behind three of the most popular Text Classification methods (Naive Bayes, Maximum Entropy and Support Vector Machines) and told you that I will use these Classifiers for the automatic classification of the subjectivity of Amazon.com book reviews.
The purpose is to get a better understanding of how these Classifiers work and perform under various conditions, i.e. do a comparative study about Sentiment Analytics.

We can collect book reviews from Amazon.com by scraping them from the website with BeautifulSoup. The process for this was already explained in the context of Twitter.com and it should not be too difficult to do the same for Amazon.com.
In total 213.335 book reviews were collected for eight randomly chosen books: 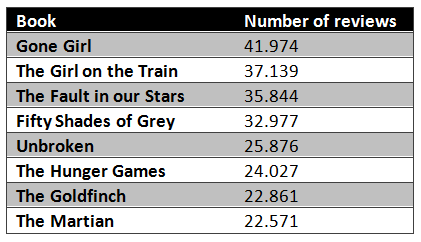 We can see that the book ‘Gone Girl’ has a pretty uniform distribution so it seems like a good choice for our training set. Books like ‘Unbroken’ or ‘The Martian’ might not have enough 1-star reviews to train for the Negative class.

The bag-of-words model is one of the simplest language models used in NLP. It makes an unigram model of the text by keeping track of the number of occurences of each word. This can later be used as a features for Text Classifiers. In this bag-of-words model you only take individual words into account and give each word a specific subjectivity score. This subjectivity score can be looked up in a sentiment lexicon[1]. If the total score is negative the text will be classified as negative and if its positive the text will be classified as positive. It is simple to make, but is less accurate because it does not take the word order or grammar into account.
A simple improvement on using unigrams would be to use unigrams + bigrams. That is, not split a sentence after words like “not”,”no”,”very”, “just” etc. It is easy to implement but can give significant improvement to the accuracy. The sentence “This book is not good” will be interpreted as a positive sentence, unless such a construct is implemented. Another example is that the sentences “This book is very good”  and “This book is good” will have the same score with a unigram model of the text, but not with an unigram + bigram model.

My pseudocode for creating a bag-of-words model is as follows:

The real question is, how we should determine the sentiment/subjectivity score of each word in order to determine the total subjectivity score of the text. We can use one of the sentiment lexicons given in [1], but we dont really know in which circumstances and for which purposes these lexicons are created. Furthermore, in most of these lexicons the words are classified in a binary way (either positive or negative ). Bing Liu’s sentiment lexicon for example contains a list of a few thousands positive and a few thousand negative words.

Bo Pang and Lillian Lee used words which were chosen by two student as positive and negative words.
It would be better if we determine the subjectivity score of each word using some simple statistics of the training set. To do this we need to determine the class probability of each word present in the bag-of-words. This can be done by using pandas dataframe as a datacontainer (but can just as easily be done with dictionaries or other data structures). The code for this looks like:

Here split_text is the method for splitting a text into a list of individual words:

This gives us a DataFrame containing of the number of occurances of each word in each class:

As we can see there are also quiet a few words which only occur one time. These words will have a class probability of 100% for the class they are occuring in.
This distribution however, does not approximate the real class distribution of that word at all. It is therefore good to define some ‘occurence cut off value’; words which occur less than this value are not taken into account.

Determining the Subjectivity of the reviews

we can determine with the bag-of-words model whether a review is positive or negative with a 60% accuracy .

One thought on “Sentiment Analysis with bag-of-words”